“Here” is Kolkata which is a little like being a small and excitable child standing in the middle of the worlds largest fireworks display all going off at once straight under your nose, shooting sparks and streamers and stars and rainbows and torrential rivers of colour right before your eyes.  It’s a fantasmagoria, a world spinning on a turtle, a silky, graceful, lithe, splendid, delicious, dream.

But before we can begin to describe the cosmic Bengali kaleidoscope we find ourselves ecstatically revolving in we must bid a final, fond farewell to the incredible Wats of SE Asia.  Too many to choose from, all too beautiful, but here are some final pics from the last Wat we visited in Luang Prabang.

Who should we see but Ms Mary Poppins, holding her magic brolly and humming gently to herself.  We edged closer and heard the following localised adaptation of one of her popular tunes…

Stuck, not so much in a groove as in a rut of bad musicals we encountered a number of elderly Occidental males in the company of young oriental ladies and the following came to mind, sung to the tune of Camptown Races.

”Old white man and young brown girl doo-dah, doo-dah, poor old fella or unmitigated churl, who are we to say ? Sits and drinks all night, sits and drinks all day, lost his money to his third ex wife, she’s going to make him pay”.

Some of the baby monks appeared critical of our literary efforts. 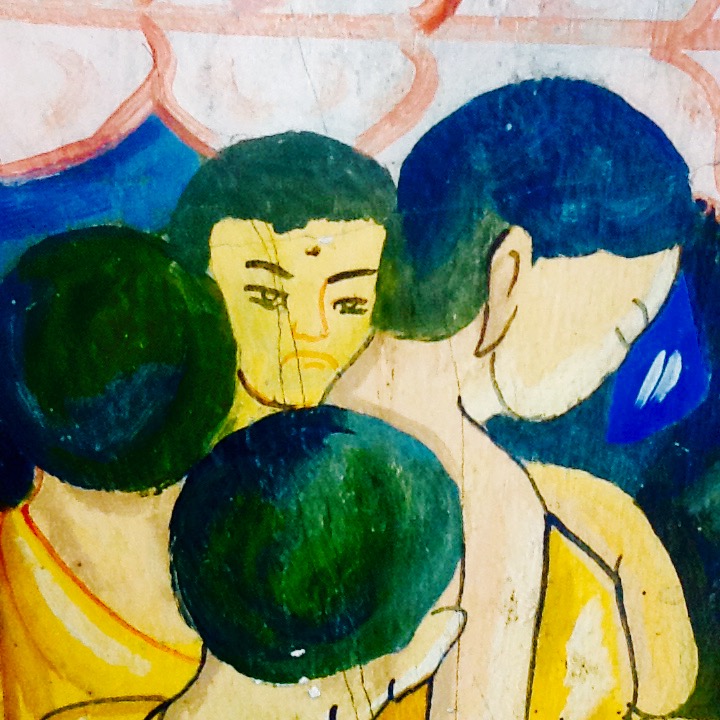 This lady also appeared to be critical, seeming to say  “Just say NO to cheap and shoddy rewrites of popular tunes and, while we’re at it, also to Elephant riding. “

We saw a cow seriously reconsidering his donation to the Save The Tiger appeal.

Then, on our last morning in Luang Prabang, waiting for the tuk tuk to the bus station at 5 am on a misty morning, we saw these baby monks drifting through the mist.