Correction: The looooooong and winding road to Luang Prabang

Bing and Bob weren’t onboard but there was certainly a plethora of Dorothy Lamours complete with sarongs, (though smaller, browner and marginally less glamorous).

We were picked up in the VIP chauffeur-driven cattle truck and bumped merrily along to the bus station. The usual Security Committee of the United Nations with a charming Italian piano-playing Sports teacher from Sardinia, Riccardo, with his beautiful Thai girlfriend Hoi, and a lovely young French couple from Strasbourg.

We cocked a snoot at the regular public travellers and literally looked down upon the mini bus people, as we boarded our VIP chariot. It displayed the latest in onboard entertainment systems.

This obviously calmed the chirping chicks that were stowed under the seats.  Strangely, after a while, the chirping stopped.  “They must be asleep”, we reassured ourselves.

Before departure we were presented with an array of food, accessory, clothing and medicinal choices from lovely passing Laotian gypsies. 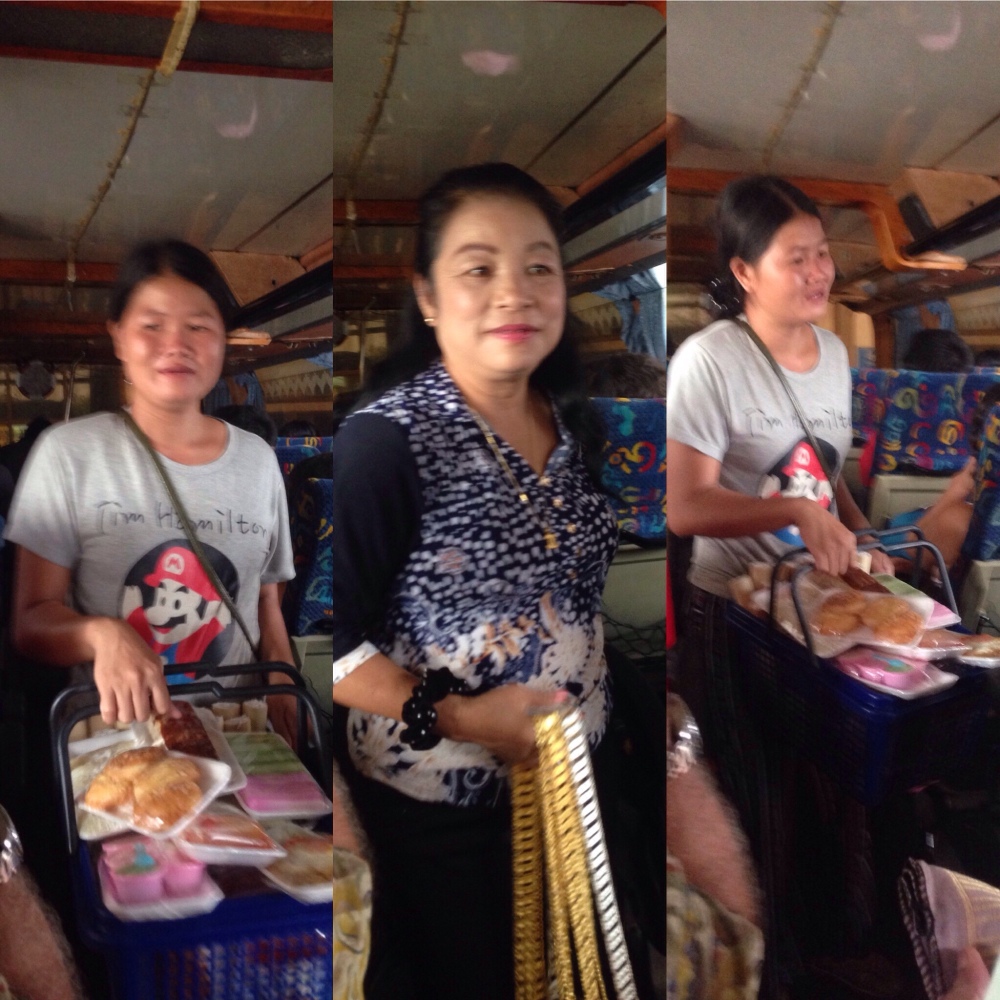 There were no VIP seat belts, or windscreen-wipers (but we only had two hours of rain after all) and we had complete confidence in our sixteen year old driver who was dashingly attempting to grow a moustache and who wore thongs as he flailed at the pedals and wrestled with the wheel around hairpin bends, with drops to the side so very deep that, had we fallen, we would most certainly have landed with a bump in your backyards.

We had eschewed the overnight sleeper (9 hours horizontal in a space smaller than a coffin, but less cheerful), after hearing of the beauty of the Laotian countryside. This was somewhat (but thankfully not entirely) thwarted by the heavily begrimed windows.  We were somewhat mollified by the thought that it was, at least, VIP dust and grime.

We had been warned that the road was wilder than a bucking bronco & in some parts indeed it was so we were both happy to have packed on our own personal padding in the derrière, however we doubt the chairs had been approved by the orthopaedic association.

But that was the least of our problems – (more of that later).

VIP aircon was more a suggestion than reality and so we accepted the streams of perspiration from the crown of our heads, down our noses, both ears and back of the neck, glistening manfully and/or saucily on our chests and sparkling playfully on our backs before proceeding south past our soggy unmentionables, and thence down our legs and around our knobbly knees to our swollen ankles and feet.  (You’d pay a bundle of Kip for this sort of thing in a spa you know).

Before take-off we had been issued with emergency mountain survival rations – banana cake with fake white cream and a bottle of water.

Imagine our delight when we discovered the bounty did not stop there but we had a coupon for lunch too! (Disturbingly phallic balls of luncheon meat bobbing in a noodled broth presented with a bowl of dare-we-eat them weeds, grasses, herbs and chillies).  We dared, and they were darn good.

There’s a surrealism to the countryside: Golden Wats every couple of miles, huge mansions of the type favoured by South American drug lords and deposed dictators, the quaint typically Laotian Swiss-chalets with their Cape Cod roofs, shanty towns cobbled together with palm leaves, corrugated iron, bamboo patchwork (& a lot with satellite dishes) and the ever-encroaching jungle and rice paddies. Cattle and chickens beside car dealerships and iPhone vendors, coal mines, power plants and Hydro- electric stations.

Bobbie Burns raved about the hundred greens of Scotland but Lao* would give him a run for his money. Lurid fluorescent lime grasses, the lush mosses, the tumbling hills.

*In Australia we call it Laos but here (in the actual country) it is called Lao.

I find the mists creeping over the mountainside romantic however Bill has reservations when confronted by security barriers made of bamboo twigs or plastic twine to protect you from the vertiginous plunge to your doom.

Stops along the way: 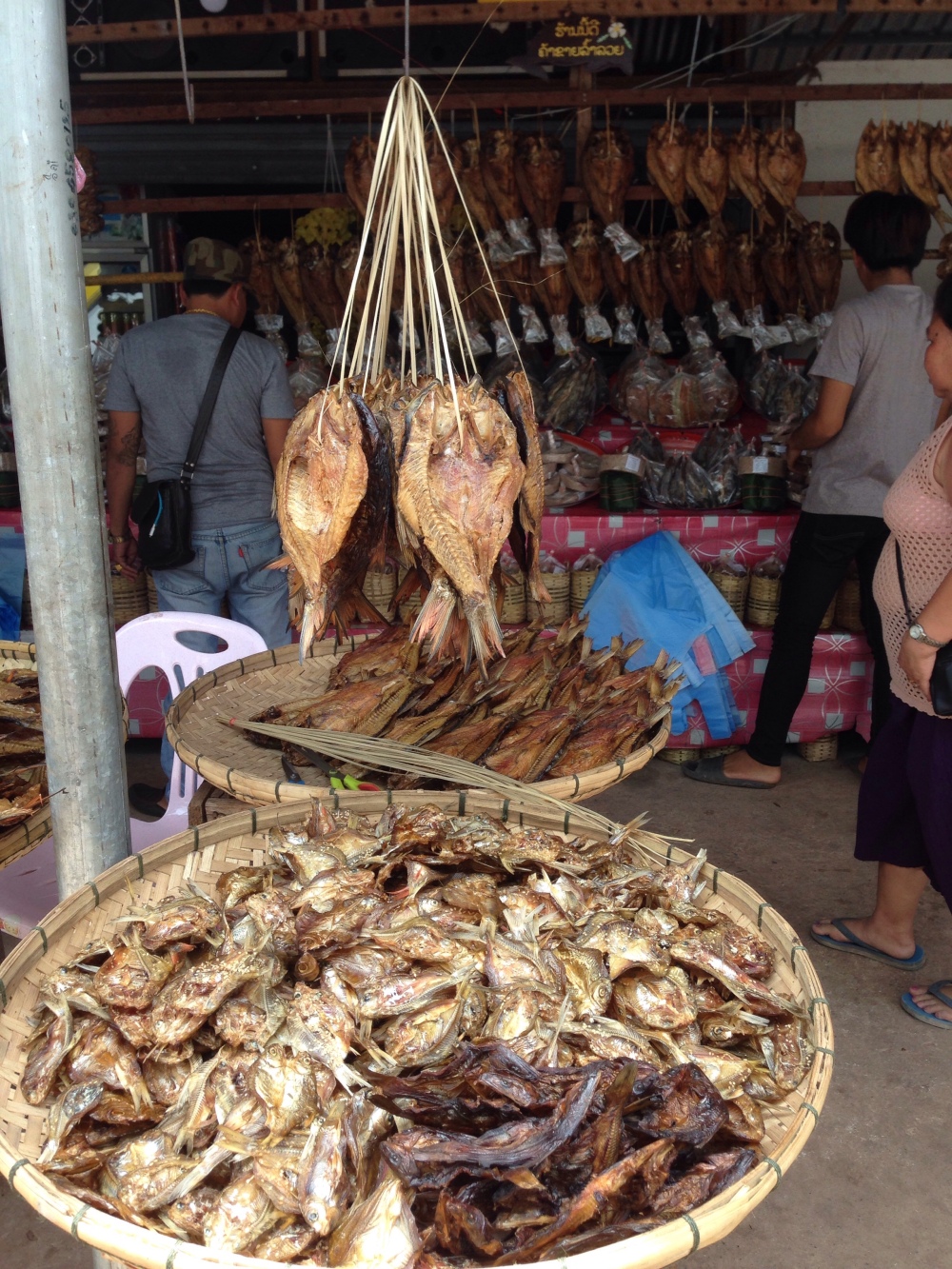 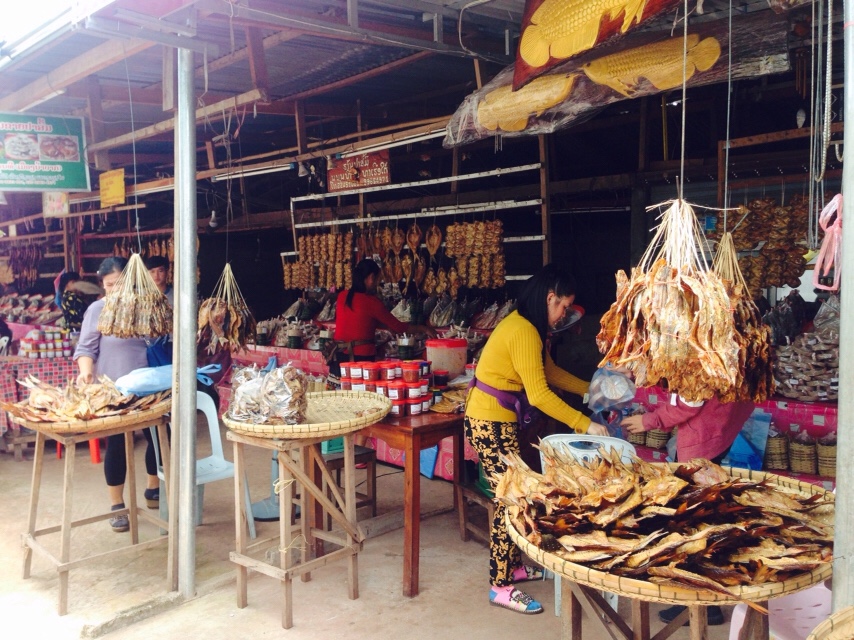 We didn’t eat the tasty treat below but the lady that did spent the last few hours of the trip with her head in a plastic bag enjoying rather noisy bouts of reverse peristalsis in the seat just inches across the aisle from we, your delicate and increasingly dislocated correspondents, 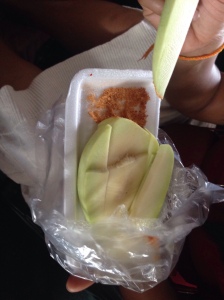 So the trip wore on ( not unlike our blogs, far longer than necessary), 9 hours turned into 12, but eventually our metal chariot swung into a dilapidated bus stop, disgorged us and, (as is the way in the mysterious East), our dishevelled and cadaverous remains were pounced on and argued over by tuk-tuk drivers, who then poured us into their colourful charabancs and tuk-tucked us into the very heart of Luang Prabang.

2 thoughts on “The Road to Luang Prabang”