So long Saigon, city of love children, bustling metropolis studded with gems, shot through with flavours and sights. Even though it is supposedly one of the least charming cities in Vietnam, industrialised and allegedly not as beautiful – we loved it.

We were packed and ready to head to the train station for the Nha Trang express.  Just time to squeeze in a phō and a teensy bit more slack jawed rubber necking  before we go. And, boys and girls, what a phō it was.  A deep, rich, comforting beef stock filled with flavours and fragrances, nothing overpowering just hints here and there; star anise, five spice powder, caramel, coriander. The broth filled with beef (you choose what part of beast) presented with a plate of green herbs, accompanied by sauces and chillis to your heart’s content. Phō – nomenal!

Thus fortified we toddled down Huang Sa along the lazy Saigon River heading for the Temple of the Emerald Buddha.  A sweaty walk it was.  I don’t know about you but when I build up a thirst I reach for a Zorok. 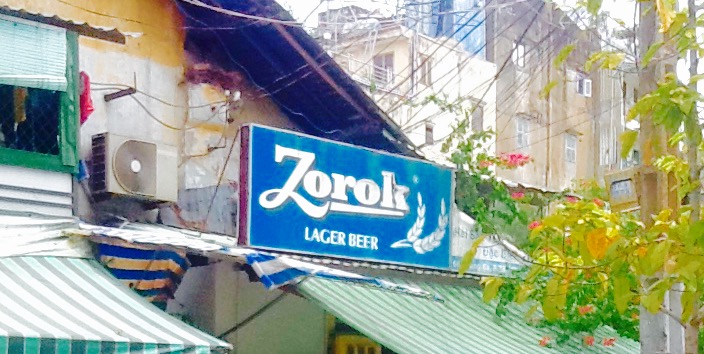 (Disclaimer: this blog NOT supported in any way by the Zorok Corporation or any of their subsidiaries) .

Just below the Zorok sign ( MAN what a lager !  The pause that refreshes ! I can feel a Zorok coming on), was this lovely little household shrine.

So on we went, this way and that, along the river, over a bridge, back along the river to where we had seen an enormous domed temple which we had assumed was the Temple of the Emerald Buddha.  Somehow, mysteriously, the huge temple simply disappeared, Brigadoon style.  Seriously, it were nowhere to be found.  Something told us we were not in Phnom Penh anymore Toto.

We chickened out and gave ourselves over to a cab driver who dropped us at the gates of the real Temple.  A modest affair, but well statued and full of believers. Bring on that old-style religion with huge and terrifying demons, rooms filled with the torments of hell – oh yes, I’m looking at YOU, sinner. A small room filled with 12 small statues of women displaying various human characteristics – (we bonded with the happy drunken woman raising a huge stein in merriment despite the fact that I think she was meant as a warning). 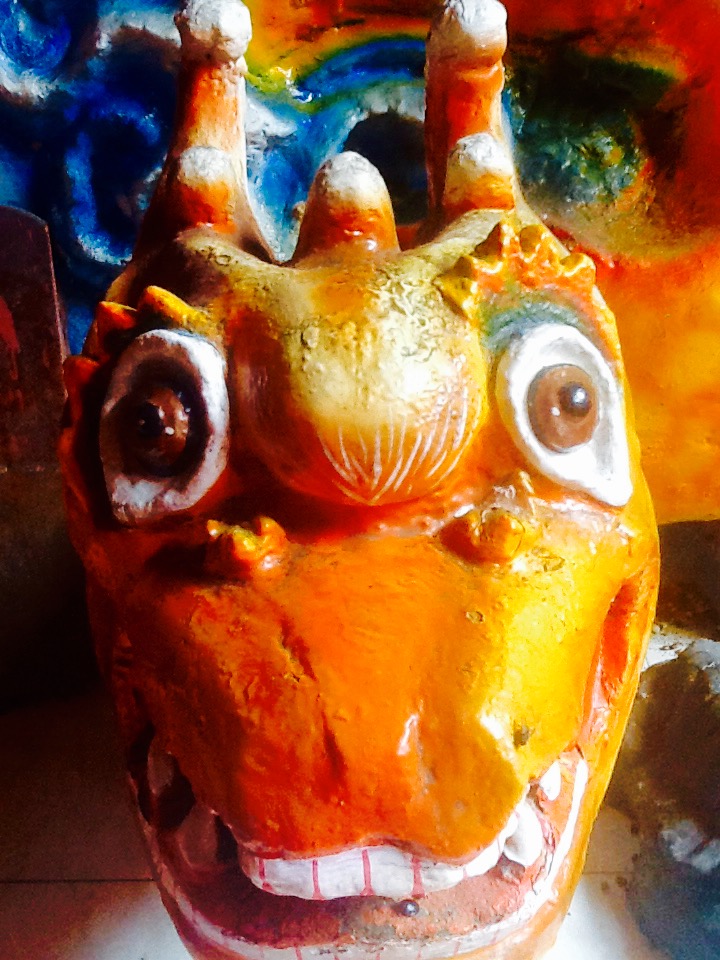 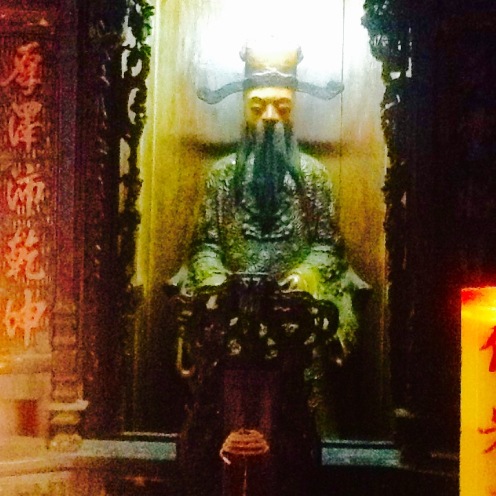 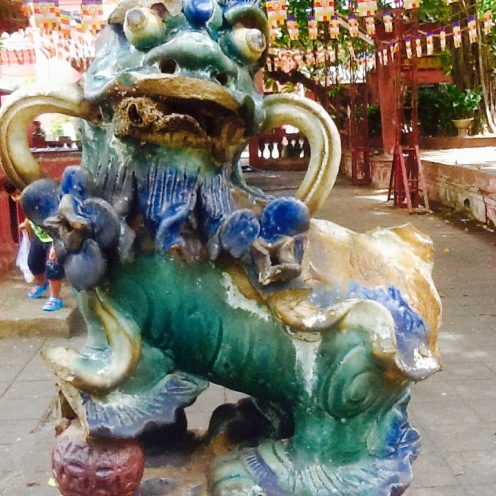 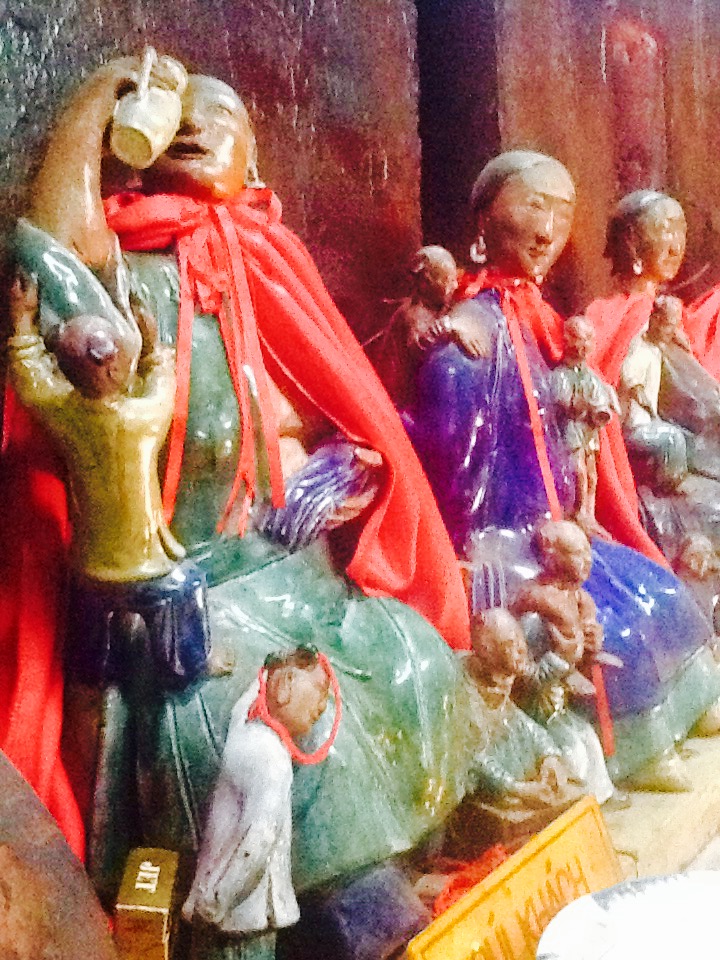 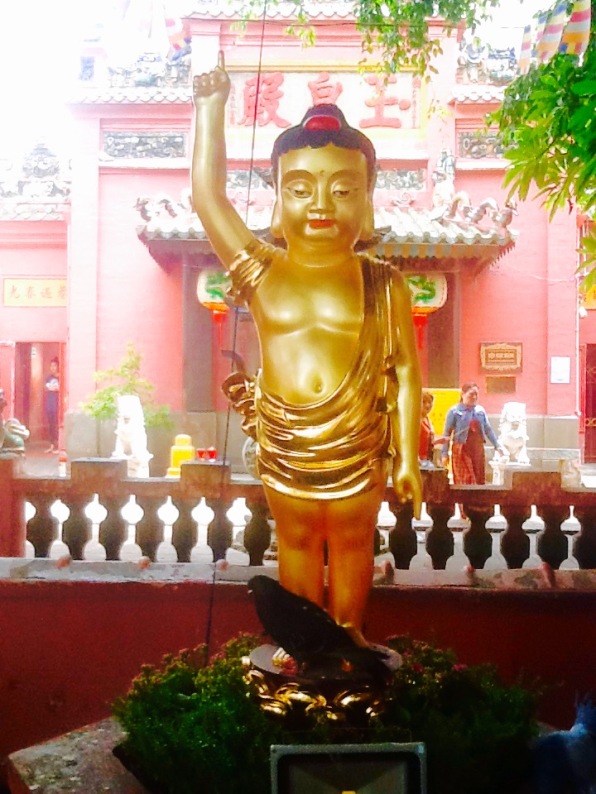 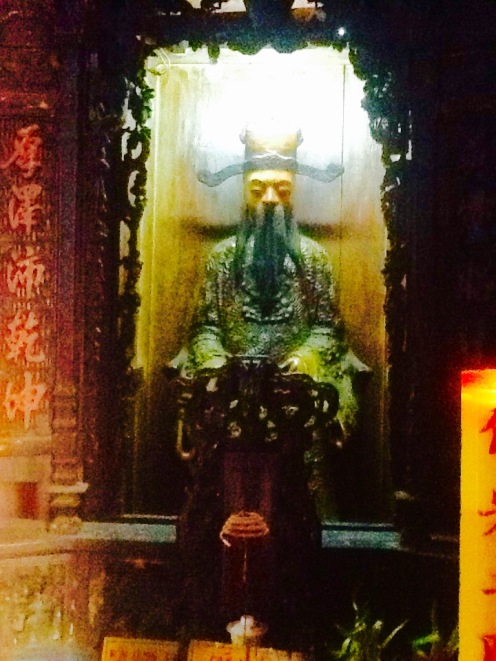 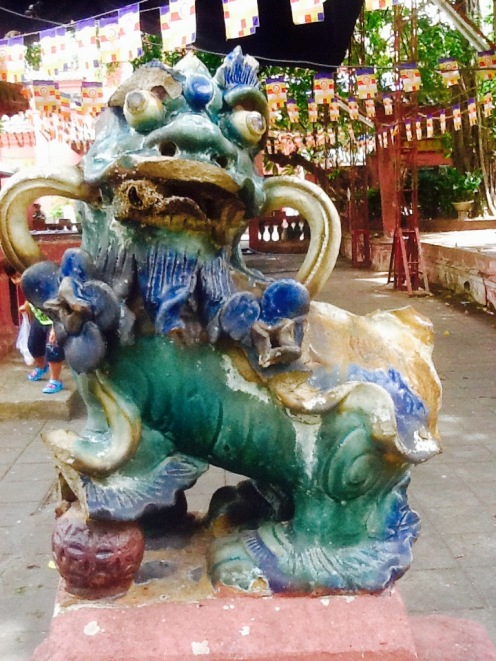 Our lovely Grab driver drove us to the Saigon Train Station; all Saigon had seemed to turn out to say goodbye.  Every footpath, street, alley, avenue and resteraunt were chockers with Saigonese having a Friday night shindig.

The Nha Trang express !  We were excited, amazed and gobsmacked that a mouse click in Edgecliff some months ago would lead to two tickets with our names on them in an envelope in a drawer at a kiosk at Saigon Train Station.

But so it proved to be and with a revolutionary song in our hearts ( something about continuing to thrash rice in the fields despite having given birth five minutes ago) we mounted the great iron engine.

Have we made it plain that we LOVE Vietnam ?  Well we do, and the following slightly poetic and far fetched description is meant affectionately.  Now…

Imagine you’re on an icy cold morgue slab – laid out on that hard surface – your only warmth the same sheet that’s covered the last hundred corpses. Imagine the dissection department next door is having a rambunctious & very noisy party (or else the corpses they’re dissecting are still alive)…

…so no RIP for anyone.

‘
Evidently cockroaches hitch rides on Vietnamese trains (another reason for using the “blankets”of-many-users) crawling in the private (4) bunks, smiling at you in the loo, winking at the washbasin (they’ve seen the long tongs in the toilets & they’re perplexed too, Why God Why) ?

The smoothness of the ride? An ox cart on a rocky road with a broken wheel. Yes it’s the train from Saigon to Nha Trang and it’s NOT the Canonball Express believe you me! (However the rail system was built in 1920s which is impressive – They’re working on the upgrade now).

Round 2am a loud blaring announcement in Viet-train-babble announced something important (or maybe it was some Communist thing – all for one and one for all – if we’re not sleeping, you’re not sleeping. Who knows. The ways of the East at times are inscrutable and endlessly fascinating…a bit like our blogs, except for the “inscrutable” and “fascinating” bits).

Bill fared worse. The Upper berths have the aircon focussed directly on them. The morgue slabs are the Riviera compared to the gulag-class in the Siberian winters up there. The thin “blankets”-of-many-users like tissues in a blizzard. He soldiered on without complaint (his jaw, tongue and teeth were frozen), but was shivering, sneezing and soggy when we stepped of the train into the pouring rain at Nha Trang.

Below is what could be a shot of Cpt “Titus” Oates leaving Scott’s tent but is acutally Bill’s frozen lower extremities.

Through the rain we trudged, headachy, feverish and damp.  We wandered the overcast drizzling esplanade and gazed upon it glumly, even meeting the charming seminarian Lum at the Archbishop’s house only raised our spirits slightly.

Lum blessed us, God bless him,  His Grace the Archbishop himself, replete in his robes of office, popped his head around the corner, took one look at two dishevelled, elderly, snivelling, very dislocated, red eyed, wild haired feringhees and seemed to suddenly recall some urgent Diocesan work that required his immediate attention.  Really, he popped around the corner, looked at us, his eyes bulged and he popped backwards around the corner all in about a half a second.

We staggered to a little local museum dedicated to Alexandre Yersin, the scientist who introduced Quinine and rubber trees to Vietnam, was a pal of the Curies, Pasteur and Lumiere, and isolated and sorted out a cure for the plague bacillus.

He was also evidently an early chronicler of and champion for the Mois, the “First People” of Vietnam.  We’ve looked them up and it sounds a very familiar story. The Reference books claim that when the Vietnamese arrived a few hundred years ago there was “no one living here”, “just” a few primitive tribes.  Very similar story with the ethnic Malays and Thais.  Terra Nullias was very widespread it seems. 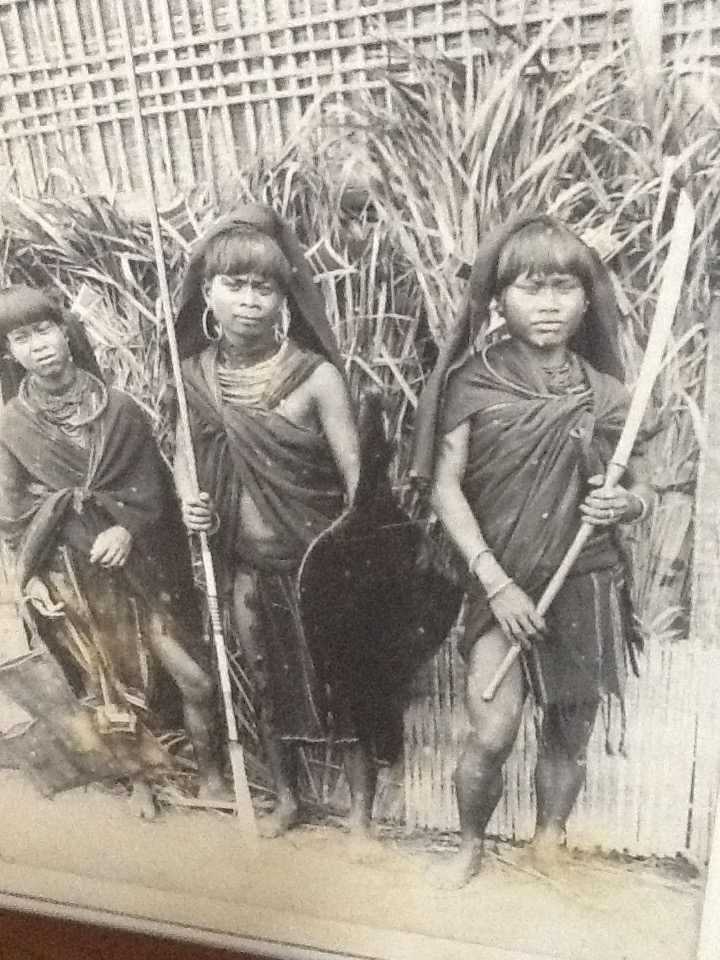 We wandered the streets of Nha Trang, amazed by the crowds of VERY big and VERY surly Russians.  Each one Of them looked capable of defending Stalingrad on their own and looked at us as if we were the paltry survivors of Field Marshall Paulus’ army, (which was pretty much how we felt).

We’re sure the Russians are very kind to their parents and small animals and weep into little lace hankies at the slightest provocation but these guys just look huge and grim and jowly and like a wet weekend in one of the less fashionable gulags.  The men also seem sad.

Fell into bed and slept fitfully for a day or so and, miracle of miracles, awoke feeling human again.

Hai treated us like a Dutch Uncle (although from what I’ve read of how the Dutch behaved in Asia it seems an inapt expression), and revived us spiritually and corporeally.  We ate and drank splendidly and gazed admiringly at photos of his beautiful baby daughter, whom they call “Strawberry”. Hai speaks ten languages ( he counts English, American and Aussie as three).

He kindly pointed us in the direction of the nearest market (for what dislocated hippies blog could be complete without the local market) ?  Long suffering, gentle and patient readers, here they are.  In order of appearance.  First, the Vietnamese Squat ( don’t try this at home), secondly, every eggplant imaginable; thirdly. Is that Dorothy veggie shopping ? and lastly, a reflective shop owner. 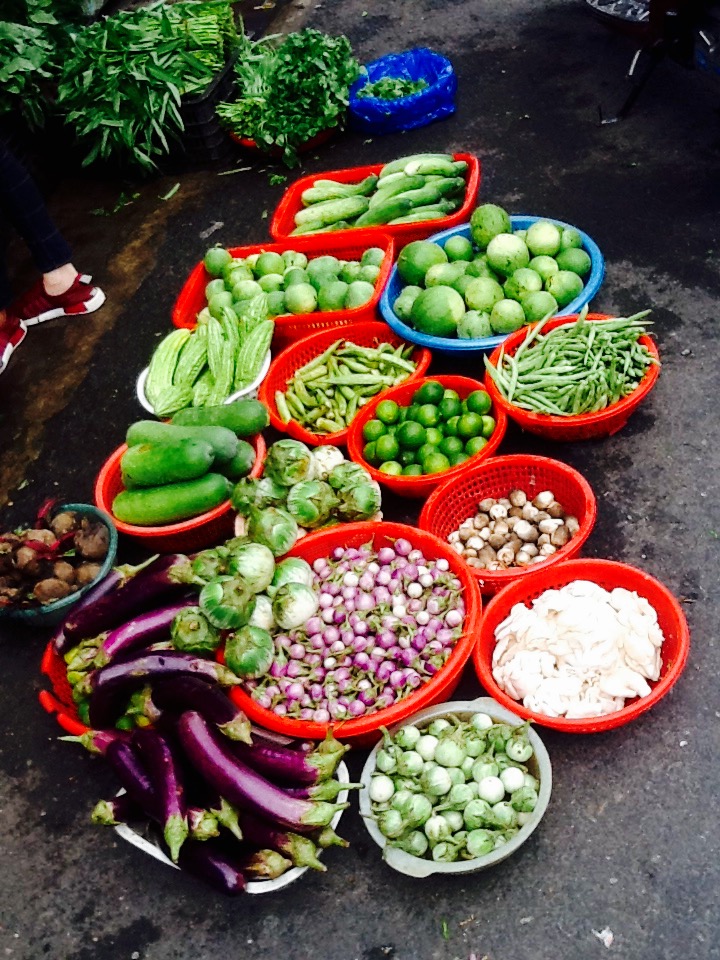 Next we came upon a series of very eerie mannequins.  Perhaps it was the after affects of the Panamax but we expected Rod Serling to step out from behind one sucking on a Lucky Strike and inviting us to join him in The Twilight Zone.  Here they are with suggested TZ title. 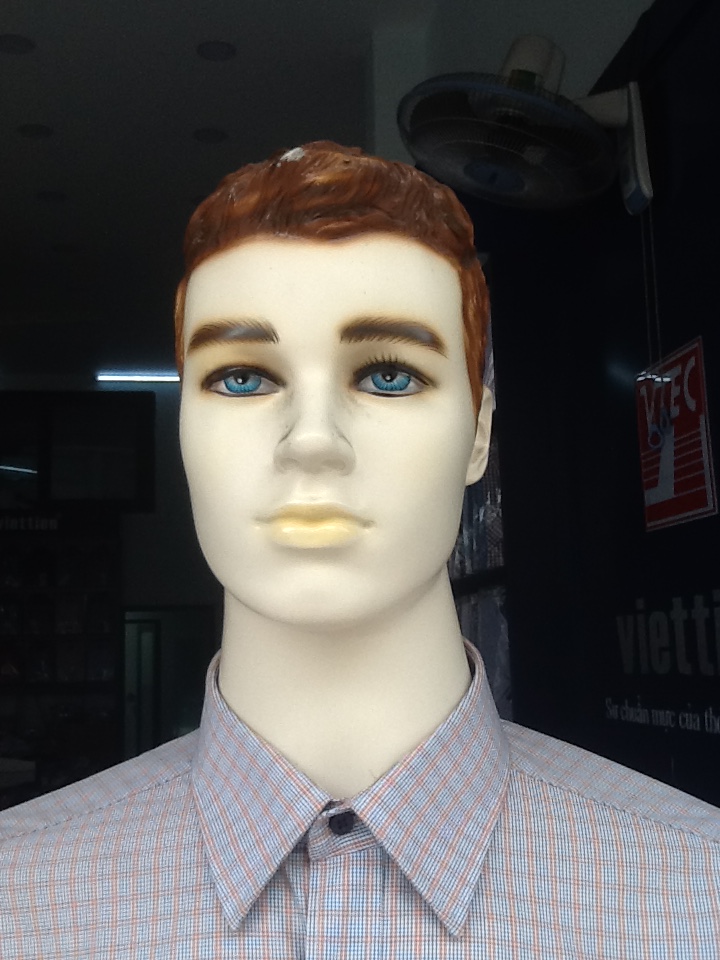 Finally, what didn’t we fight the Revolution and drive out the Imperialists for if we have to leave our gasoline, poison and guns in the lobby ?  Where is Vietnam’s Sherriff Joe ?