We were wandering one of the main streets of our hood after dark. The two sides are completely different. One has a wide, flat footpath, aromatic and dark to the extreme. The other is well lit, tiny, uneven, with scooters barring your progress and coffee shops everywhere. It’s always a toss up which to choose. Since I was limping from previous uneven surfaces we decided to take a walk on the Dark Side.

Now darkness in Asia is a constant surprise, usually pleasant, but not always.  You take the rough with the smooth, men peeing, spitting, hawking, roosters under cages with bricks on them, gigantic, healthy rats, songbirds (strangely, black canaries) tweeting melodious chansons.

We were, however taken by surprise when a nearby pile of miscellaneous refuse, food scraps, pineapple crowns, chicken legs and combs, banana and mango skins, newspapers, party circulars, old tyres, bits of plastic and smouldering rubber and a whole other world of detritus started snuffling, shivering and snorting.

Being Alice I naturally wondered but only momentarily as  a magnificent piebald, bewhiskered pig burst out of the garbage and came at us.  Well, waddled towards us really 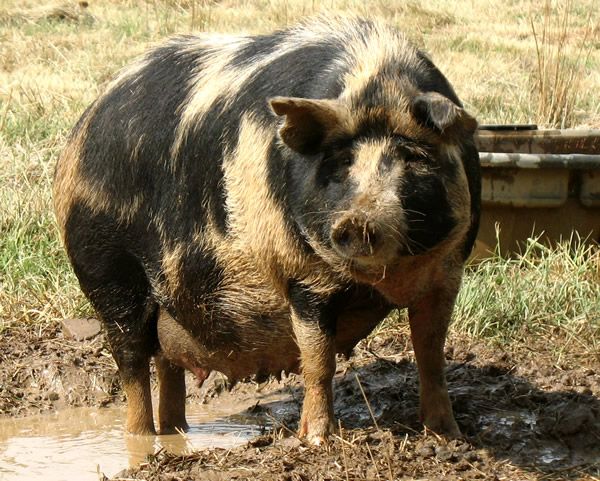 To my eyes (City gal after all) he seemed gigantic but Bill assured me he was merely large. His wild-eyed proprietary owner quickly appeared out of the shadows – probably more scary that her porcine charge.

In the immortal words of PG Wodehouse whilst she was perhaps not entirely disgruntled, she was certainly far from gruntled.

Fresh from this shock and in dire need of refreshment we stumbled upon The Vintage Emporium- a little piece of Newtown in Saigon, it’s clean, well-designed, friendly, run by the beautiful Vietnamese wife of an absentee Aussie- and maybe geared to a more Western crowd (though it’s obviously hip and happening for locals as well judging by the numbers there). Great granités (I had lychee and mango), elegant tea sets, huge portions in a space filled with evocative framed photos of elegant  Vietnamese of yore.

A calm oasis in the hustle and bustle of Ho Chi Minh City.

We visit the laundry every few days, it’s pretty sweaty walking about over here.  It’s down the street, along the Saigon River, over a bridge and then a little further on.  Just under the bridge is a little market. 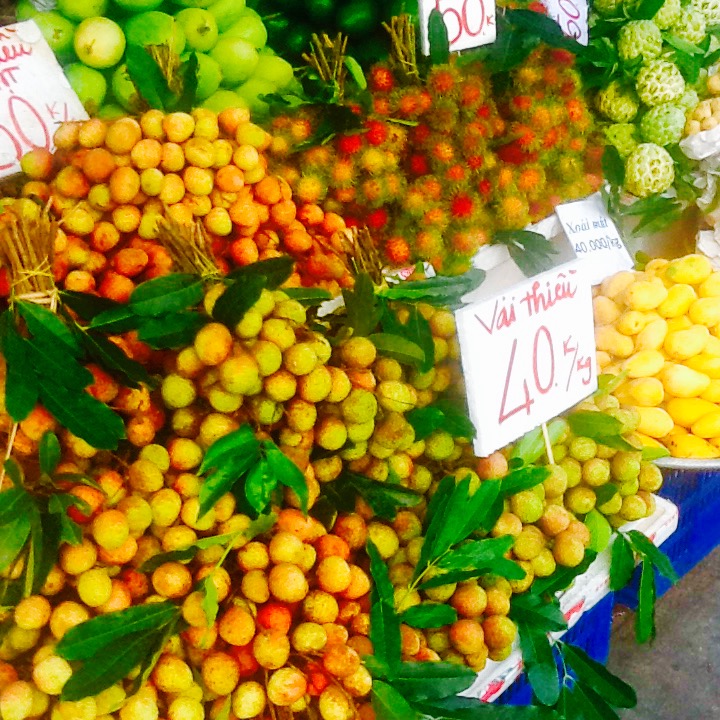 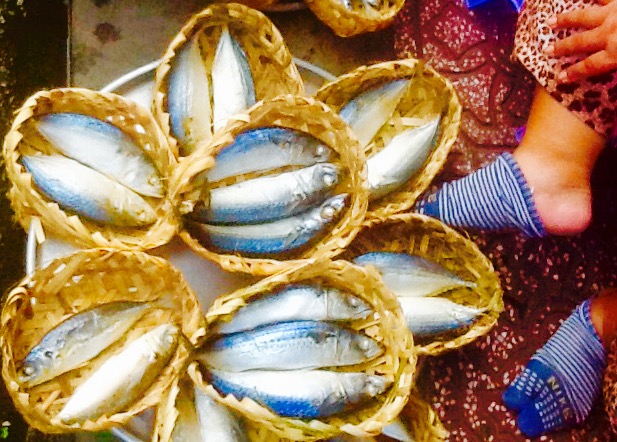 We bought some green skinned oranges there that have an almost purply-maroon coloured flesh.  They were so sweet and juicy that  just hand squeezing a half would easily fill half a glass.

Between the market and the laundry is a pretty impressive church with some nice Vietnamese stained glass.  Just beside the stairs leading up to the organ loft was St Cecilia, the patron Saint of Music, depicted tickling the ivories herself.

Outside in the courtyard we found this. 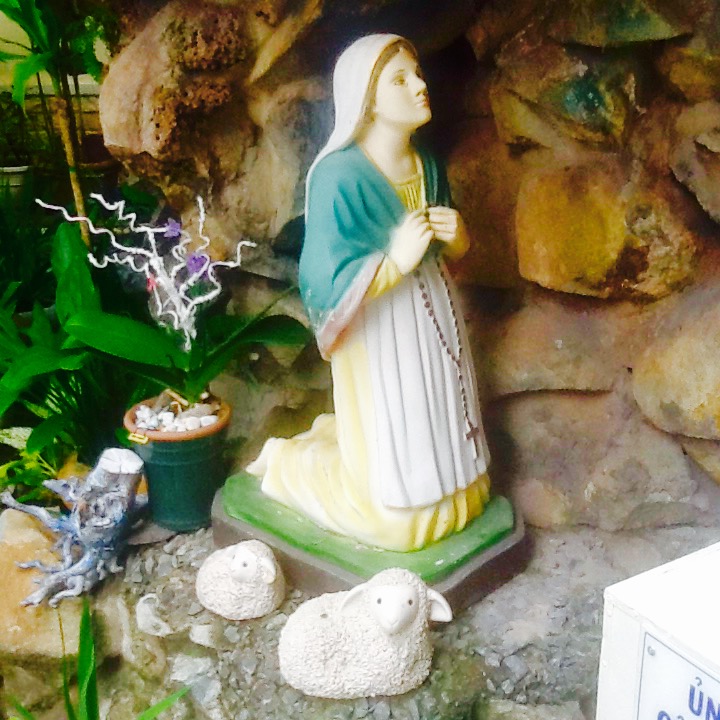 According to the Lonely Planet something like 80% of the country are Atheists, 10% bhuddists and the remainder the other usual suspects.  We suspect this might be the official line ?  A bit like the Bolsheviks insisting there were no gays in the USSR.  This city, at least, seems to be full of churches, temples, shrines, grottos, holy statues and what not.  Every other house and business and street corner seems to have a little shrine, religious imagery is everywhere. 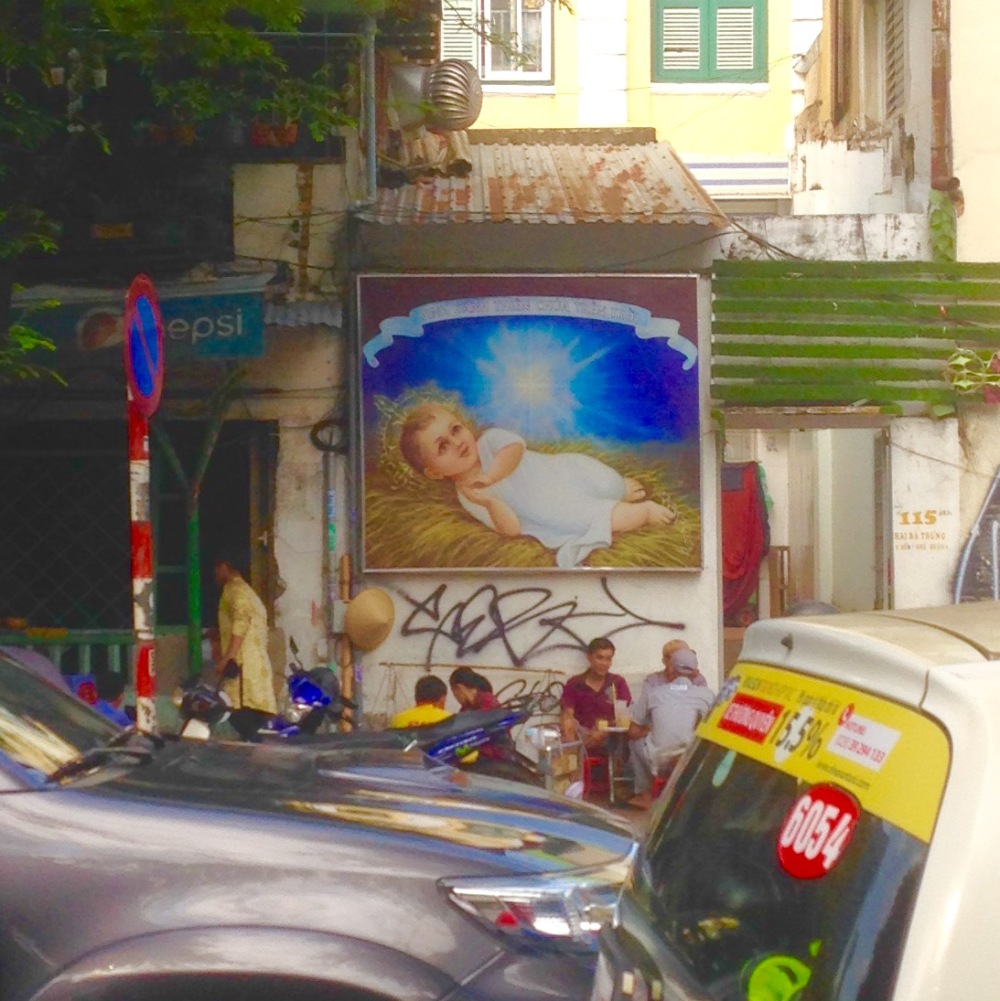 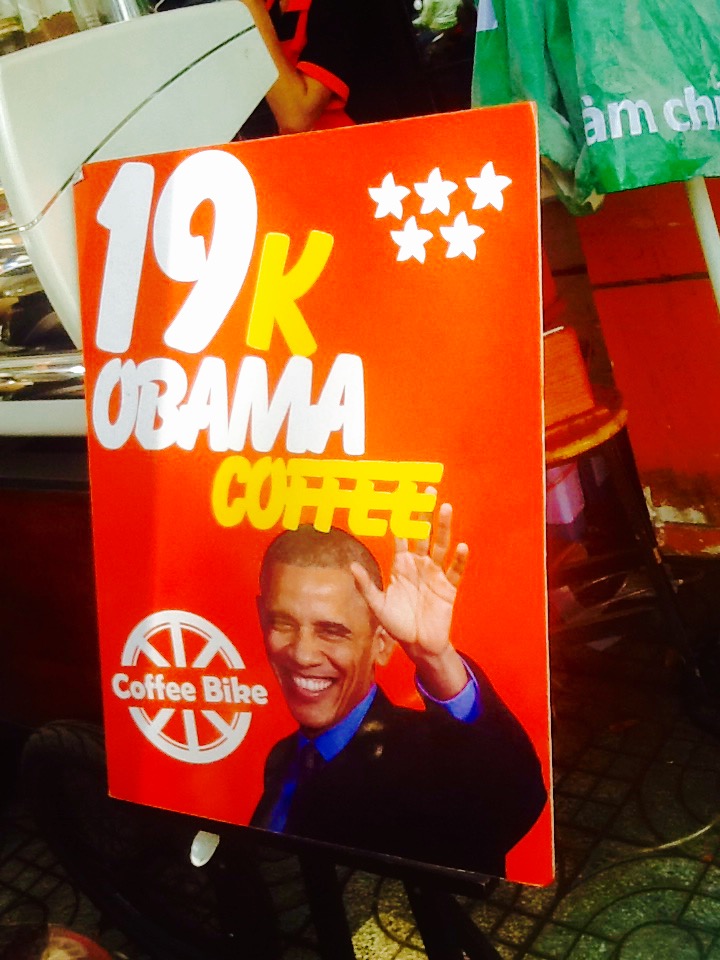 We ate at Blooms Restaurant which is set up to train parentless youths in the hospitality industry. Being an orphan any where is tough but in a country where vendors sell peanuts for less than peanuts and child trafficking is (evidently) not just something you see on tv –  it’s reassuring that charities like this exist.

Blooms is just round the corner from our Air BnB. The fried fish with mango salad was good. The lemongrass chicken delicious and spicy. The green runner beans with garlic- a great serve. The lime sodas are in a glass that seems bottomless.

We also tried a vegetarian restaurant called TIB and had a lovely meal of steamed tender eggplant sliced into cubes, caramelized and sauced with julienned ginger, a beautiful rice dish, (rice in the middle that you mix with lightly pickled cucumber, garliced greens, lots and lots of herbs, & sauces) and a Tonkinese creeping flower vine in garlic.  The TCFV was a little like broccolini but scratchier.

Dinner tonight at the local.  Okra with big pieces of garlic and thinly sliced buffalo with chilli, tiny round eggplant, beans and bitter melon.  Didn’t get any pics of that but here is rice from the same place from lunch today.

The chemists here are very obliging. In a quest for lemsip one is offered everything from throat lozenges, to antibiotics (over the counter) to some strange high-powered lozenges whose contraindications include culvulsions, paralysis of respiratory muscles, coma or death (by heart attack). I’m sticking with the strepsils.

The scooter traffic is really something to behold.  You need the skills of a ninja just to walk down the street, carefully assessing each patch of ground before you put your foot on it.

Crossing the road requires the sort of 360 degree omnipotence usually associated with a Hindu God.  The Scooters come at you from every direction, in front, behind and to both sides, usually at once and rarely predictably.  So in watching your feet AND the roads and footpaths all around you you develop a series of senses undreamt of in any previous philosophy.  You develop a third, fourth and even fifth eye, in parts of you where no eye should be.

Much of the footpaths have little ramps where the gutter should be, perfect for scooters to mount and zoom along among the foot traffic and also for the feet of elderly westerners to slide and slip in a way rarely seen outside of amusement arcades.

Every walk becomes an adventure, every stroll a Saga.  And so we stumbled, all eyes wide open and rarely blinking, down to the rather impressive GPO, (designed by Gustav Eiffel don’t you know) ?

It’s a grand place.  You can check the current time in all of the world’s hotspots, London, Paris OR Canberra. 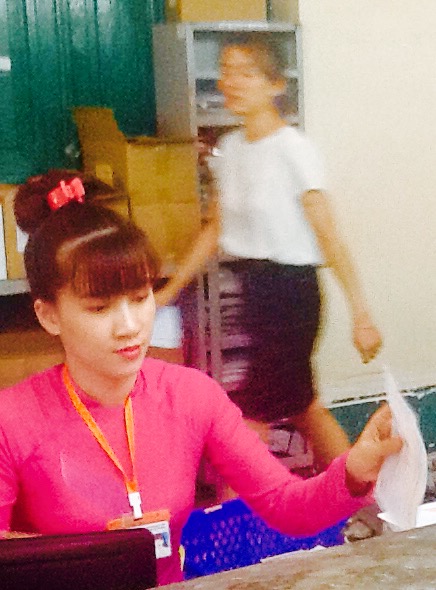 All under the benevolent gaze of Uncle Ho.

Whose image, as you’d expect, is pretty much everywhere.  Here he is adorning the headquarters of the Young Revolutionary Workers Association and below that inspecting the lunches of the workers at the soap, rubber and cigarette factory. 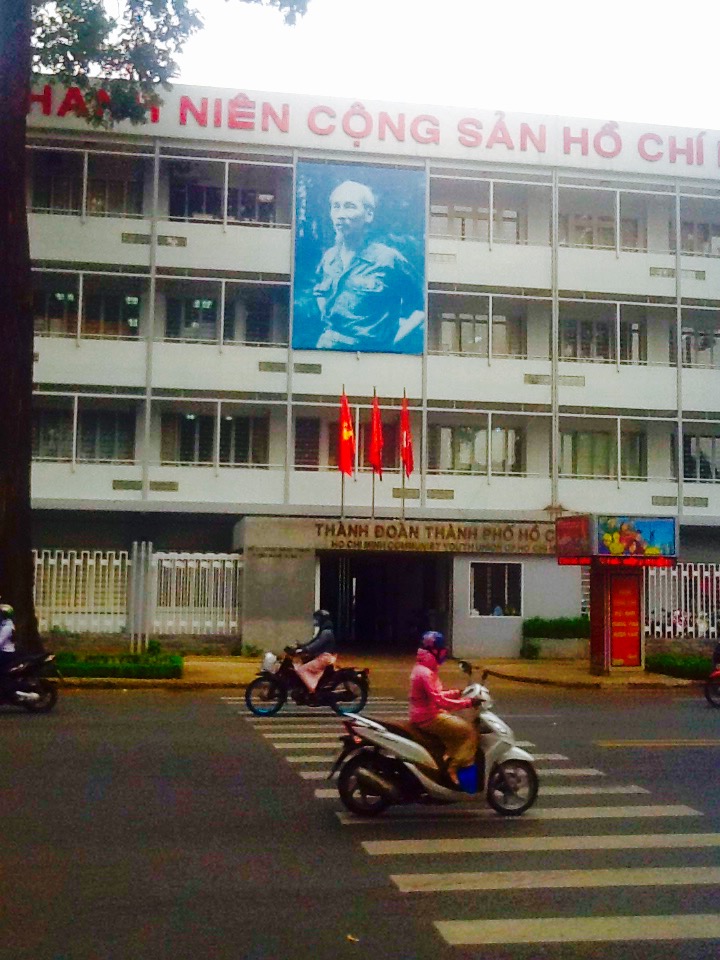 He is the Father of his Nation and a River to his People.  Revolutionary Leader, Poet, Pastry Chef, nothing was beyond him.  He was even Vietnam’s answer to Maestro Tommy Tycho (although what Tommy’s question might have been has been lost to history).

We love Vietnam and the Vietnamese, and we’ve only seen a tiny bit of one small part of it.  There’s something about them, something impressive and solemn and significant, although to walk among them you’d think you’d never met a more charming and light hearted lot.

The ancient Greeks stuck it to the Persians, the medieval Maltese defied the Ottomans, the modern Poles blew away the Bolsheviks, but these people have taken on not one, but two of the world’s great superpowers, on both sides of the ideological divide, within the space of a few years, and simply grabbed them by their noses and made them dance.

We continue to be amazed by them, (and grateful that the forward looking people of Saigon let bygones be).

10 thoughts on “Let Saigon be bygones”