Some general recollections before they fade and disappear.  On our first morning in Singers, sitting outside the laundromat drinking coffee with “no sugar” that seemed mysteriously sickeningly sweet,  we saw graffiti in good old Anglo Saxon suggesting that the Police required some rough loving as did the State.  Looking around we noticed the street was strewn with cigarette butts and just at that moment a chap came along and surprised our expectations by expectorating loudly.  “Wouldn’t have happened if Donny D’s old pal Lee Kuan Yew was still around” we thought.

We were just outside a market that held a hainanese chicken rice stall with a Michelin Hat.  Other stalls specialised in Frog Porridge and downstairs was a produce market containing large trout like fish with brilliant blue spots on their flanks.

Here are some pics from our voyage:  Kristen on the Port side at sunset; Deck 4 where we spent much of our time; our cabin and porthole; and finally the star of the show the Bonnie blue sea. 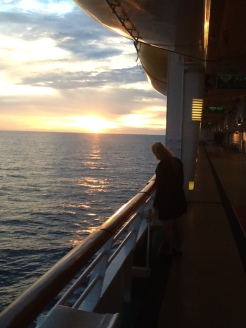 Tonight we dined at the WAW restaurant on Jalan Alor in KL, a HUGE street containing every imaginable type of Asian restaurant.  It felt like a set from a DW Griffiths film.  We had lime sodas, delicious kuay teow and Belacan okra and eggplant for $10 Aust.  Coffee at the local 24 hour Indian restaurant set us back 60c.  The WAW restaurant is in the right whilst the Old China Kafe, where after the excellent advice of  Bob & Patsy we have eaten the last two memorable evenings, is at left.

We had our first (but certainly not the last) haggle of the trip over a selfie stick.  He wanted 100 Ringgit ( about $35), I offered 10.  We settled at 40 after long and passionate expressions of regard and deep respect for each other, for our respective countries, our children, our ancestors, for the fact that I was the first customer of the day, for our beards, for the cut of our jibs, for being honest fellows and pukka chaps.  There was eyeball rolling, hand wringing, heartfelt sighs, raised eyebrows, petulant pouts, looks of disbelief, forehead slapping, tummy rubbing, forearm grasping, earnest looks in the eye…and he behaved pretty dramatically too.  In the end I sensed that he was about to break into a medly of Waltzing Matilda and I Still Call Australia Home so I closed the deal quickly and we made good our escape.

Earlier in the day we had braved Bukit Bintang, the high end of town and taken the 2  km covered walkway to the very impressive Petronas Towers.  There is every type of brand name outlet here, a cinema where for $10 each we could have watched The World’s Greatest Showman on beanbags.  Huge mobsterish looking nightclubs called the Bintang Palace with signs out the front reminding Moslems that they shouldn’t drink, nor was it advisable to bring in knives, guns, drugs or durians.  We wanted to take some pics but the local equivalent of the door bitch wasn’t having any of it.

We did, however, find this advertisement which appears to be advertising a well known American imperialist soft drink in the name of Allah ?

In our three days here we’ve only seen 2 women in the full ninja outfit and very few of the fully knitted out jihad type blokes.  Seriously, you’d see more in Auburn we suspect.  Contrary wise the vast majority of the men and women are very elegantly dressed, fantastically friendly and very easy going.  In fact, we have seen more Churches than Mosques.  Things remain strange, unpredictable, fascinating and hardly ever what we expect.  It’s great fun.  B&k xxxxxx